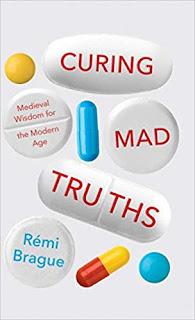 I imagine that many readers are familiar already with the French historian and philosopher Rémi Brague. My first encounter with him is via his latest book, Curing Mad Truths: Medieval Wisdom for a Modern Age (University of Notre Dame Press, 2019). It's a stitched-together collection of nine papers that Brague has given to English-speaking audiences in recent years. But that's not to say this little book doesn't put forward a coherent argument.

Brague is a conservative in the deepest sense of the word. He is concerned with the conservation of humanity itself, which he takes to be under assault in the modern West. Exhibiting his wit (not to mention his obsession with etymologies and his mastery of the English language) he commits a "deliberate spoonerism" and argues that the civilization-saving conservatism we need is essentially a commitment to conversation--conversation both with the human past and with nature itself.

Modernity is, according to Brague, a type of barbarism, defined as a "refusal to communicate". Modernity refuses to communicate with the past or with nature by way of its mythical conception of self-determination, which denies continuity with what came before and which promises a future of humanly achieved progress. The driver of this barbarism is modernity's methodological atheism which, while it allows for the description and even exploitation of the world, can offer no compelling reason why it is good for human beings to exist and to keep existing. Thus, the assertion of human autonomy inevitably results in a type of deep existential malaise. Reason itself must be seen as a product of irrational forces. Rather than grounds for meaningful action, there are merely deterministic causes.

The central move to treat modernity's condition must be a recovery of the notion of the Good in the Platonic rather than Aristotelian sense. If we are to have a reason to live, we must understand the Good not merely as something we do, but rather as the necessary ontological ground of all that exists. Brague argues that the necessity of the Good is implied in the modern (Kantian) concept of ethics as rational action (ie, action rooted in the Being of the subject), and evil as an irrational perversion of this freedom. This is a roundabout confirmation of, not only the Platonic vision, but the biblical creation story, both of which state that the Good is given to us with Being and must therefore be received as gift.

Recovering the necessity of the Good requires a return to a cosmological view of nature--the belief that the universe not only can be described in its present state or understood in terms of the mechanisms of how it came to be what it is, but rather that it is inherently meaningful and intelligible. The cosmos must be seen in terms of logos--communicating goodness to us. Humanity is not a stranger to this good nature (or "creation"), but rather at home in it, part of it. Within this good creation human freedom must be conceived as the freedom to manifest what we are as given by, in, and with nature, and not in some sort of rebellion against it. Freedom is responsive human communication with the goodness of nature. Culture is the byproduct of this communication, a cultic overflowing of praise to God (whether we realize it or not). This means, Brague says, that Christianity, if it is the true religion, is not itself a culture. Instead, it exists as a conserving conversation with every culture.

The necessity of the Good, and the attendant recovery of premodern notions of nature, freedom, and culture, Brague contends, should lead to a reintegration of both the ancient pagan virtues and the biblical commandments. Virtues are habits that allow us to "do good", to act in accordance with the nature of things. The biblical commandments of the God who says of creation "it is good" are never antithetical to this, but rather must always be species of the mandate to "Be what you are!' This rediscovery and reintegration of virtues and commandments can only take place in the family. The modern state and the modern market militate against the family. The former consistently reduces people to atomistic individuals, whereas the latter trains them as individuals who think of everything as a commodity. But the family is essential for society. The biological bond between parents and children, and the unconditional love that go with it, communicate the givenness and goodness of one's being. The family, or those things founded on the notion of family (like monarchies or the church), are the only institutions that can care about "the very long run". Only they can have a deep sense of responsibility to, and gratitude for, the past, and an existential concern for the future.

Brague's Curing Mad Truths is a radical assault on many of the things taken for granted in modern liberal societies. Nevertheless, as a "conservative" (read: conserving through conversating) project, it does not advocate some impossible return to the past. It calls us to reconnect the branches of truth upon which modernity sits to the metaphysical trunk from which they have been severed. It's a provocative, convincing, and accessible little book (only 115pp., notes and index excluded) by an important scholar, and it deserves wide attention.
Matt Wilcoxen at 12:23 am
‹
›
Home
View web version