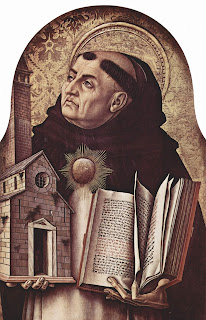 In a previous post I began a commentary on Aquinas' understanding of emotion (or "the passions") as it is laid out in the Summa theologica. In that reflection (on ST 2.22), the focus was on the nature of the soul's passivity in its appetitive part, a feature that inheres in the soul by virtue of the fact that it exists in potentiality rather than actuality. The soul's appetite is drawn toward its own perfection but is limited by the objects presented to it by the objects of sense as managed (or mismanaged) by the soul's intellectual powers. Having laid this foundation, in ST 2.23 Aquinas turns to a taxonomy of the passions in the soul.

The first point Aquinas makes here is to remind the reader of a distinction made earlier in the Summa (cf. ST 1.81.2) within the appetitive part of the soul--a distinction of the concupiscible and the irascible. The former is the soul's simple disposition to pursue pleasure and avoid pain, while the latter is the soul's more complex power to resist things that are either obstacles to pleasure or that will cause pain. The concupiscible power of the passions would make sense without the existence of the irascible power, but not vice versa. The irascible power is essential to the soul, however, because it is the ability of one passion to overrule another. To make a trite illustration: the irascible passion of the fear of becoming obese (and thus having a heart attack leading to premature death) can, at least in theory, overrule the concupiscent passion of joy I have in the consumption of ice cream. Lying beneath the irascible passion, then, is a deeper awareness of the soul's long range pursuit of the good.

The complexity of the irascible passions is illuminated further by consideration of the fact that these passions are not always definable by the mutually exclusive oppositions of pleasure and pain, good or evil, as are the concupiscible passions. For instance, the soul might actually be drawn toward some difficulty because it regards it as relating to, or causing, some good. This is the passion of "daring". At the same time, the soul might also consider the very same difficult object as an evil, something to be shunned because of its potential for harm. This is the passion of "fear". By contrast, the concupiscent passions regard a single object as either "good" or "evil". While Aquinas does not say it this way explicitly, it seems that the concupiscible power is oriented toward a single object in a single moment while the irascible power derives from the past and extends into the future, and thus relates  to multiple objects at once.

While it may seem that every passion, concupiscible or irascible, has its contrary, there is one very notable exception. There is nothing that can be said to be a contrary to the passion of anger. Anger is caused in the soul by a difficult evil that is already present and so cannot be avoided. In such situations, the soul must either succumb to this evil and experience sorrow, or the soul must attack the evil in anger. By contrast, if there is a (presumably ultimate) good present and obtained, the irascible passion ceases to move toward or away at all, and the soul can rest in the concupiscent satisfaction of the good.

The outstanding question for Aquinas in this section is whether there can be distinct passions in the soul that are complementary, and not contrary, to one another. He answers in the affirmative, due to three distinct motions that an object elicits from the soul: attraction, movement, and consummation. Thus the same perceived good may elicit the complementary concupiscible passions of (a) love, (b) desire, and (c) delight, while a perceived evil may elicit (d) hatred, (e) aversion, and (f) sorrow. In the realm of the irascible passions, there is orientation toward the difficulty as a good in (a') hope, (b') daring, and (c') [cessation of irascibility], and the orientation toward the difficulty as an evil (d') despair, (e') fear, and (f') anger.

It should be evident how within this schema how misfires may occur at the level of the concupiscible passions. The soul might be attracted in love toward something that is not, in fact, good. The soul would then move toward this object in desire. However, upon obtaining the good, the soul would discover itself to be in sorrow rather than delight. Of course, the reverse error might be the case: the soul might perceive some good as an evil, shun it, not achieve the object of delight, and thus find itself in sorrow. In both cases the error is due to a misapprehension of the good. Interestingly, what is not at all possible is for the soul to stumble into delight. If it does not perceive the good as a good it cannot progress toward it. If it perceives something evil as good it cannot help but pursue it.

Even the irascible passions appear to be no match for a misapprehension of the good. If the soul's response to difficulty is always to treat it only under the aspect of evil, then it will be in despair and fear, and its end will always be anger. At the same time, there is yet another interesting feature emerging in this section of Aquinas' account of the passions: it does not appear to be at all possible for the irascible passions of hope and daring to go wrong. Because evil is parasitic on the good and must ultimately pass away, the soul must learn to consider every evil within the context of what is real--the ultimate good. The soul's concupiscible passion(s) of love and its irascible passion(s) of hope must be trained by faith's contemplation of God.
Matt Wilcoxen at 11:48 pm