The icon of the Holy Cross: 15 glances


The icon portrays revelation: the crucifixion of the human Jesus as the appearance of the eternal God. The divine being is eternally cruciform, even as it is eternally radiant.

2.
The crucifixion of Christ is the secret of eternity, the true and only glory that shines forever from the abyss of nothingness.

4.
The crucifixion is depicted here as realistically as is possible within the bounds of iconographic form. The human Jesus stretches out his arms across a rough-hewn wooden beam. His body is bent, his feet twisted, his hands pierced, his head turned down in sorrow.

5.
Around this earthly historical cross shines an eternal heavenly cross. This budded cross is clean and perfect and unbloodied; its form is untouched by the harsh lines and distorted perspectives of the small internal cross. Its form is light itself, the light of eternity. Everything contingent, historical, earthly is suspended amid this timeless light, absorbed into the serene balance of perfect form. The budded cross is the true essential form, the Platonic reality, that projects the earthly crucifixion like a black shadow on to the wall of the cave of time.

6.
The eternal cross is a theodicy. Death and hell are safely circumscribed within its shining frame.

7.
At the top of the icon, the glorious divine face of Christ peers through the curtains, high above the earthly historical cross of Jesus. Unlike the face of the crucified one, this Christ-face looks straight ahead, reminding us that its own impassive glory is the ultimate truth of the crucifixion. On either side, the saints gather reassuringly, springing like flowers from the barren wood of the cross. The saints model for us our own proper response to the spectacle of the crucified one. We are to respond with adoring humility and reverent submission. The presence of the saints makes the cross safe, familiar, and accessible. There is, the icon assures us, a proper human posture that corresponds to the event of the cross. The cross stands not merely over and against us but alongside us, in uninterrupted continuity with our religious piety.

8.
Is not history – the history of Jesus – completely fixed and immobilised in this representation? Is it not suspended in eternity like a beautiful figure inside a glass ball?

9.
Are we not left with the impression that the icon is wholly right in what it shows, yet somehow also wholly wrong? Its sole aim is to set forth Christ as the truth of eternity, the truth that shines forever, the truth of God. But by the very act of showing this, the icon allows the impassive majesty of eternal truth to eclipse the brute fact of the cross of history.

10.
When I was a little boy, I lived in a vast sprawling mansion beside the sea on a tropical island in North Queensland. When I was grown up, I went back one day to the island and saw my childhood home: a little dilapidated fibro beach shack with a tin roof and cracked concrete floors, scarcely bigger than a backyard shed. All my life, the real earthly house had been eclipsed by the fantasy house which my memory had built for me as, year after year, I silently venerated my childhood. The fantasy house was beautiful: but it was fantasy.

11.
As though we cannot venerate Christ without immediately turning him into an idol, an eternal idea instead of an embodied person. As though religious piety produces an immediate and inevitable transformation of the cross into a smooth, perfectly balanced object, something easily grasped and held in the hand, an instrument not of judgment but of consolation.

12.
Theological truth and spiritual fantasy are thus bound together in the icon, as closely related as wheat and tares or light and day. 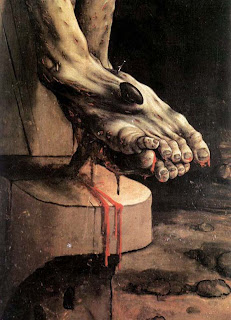 13.
You can see why Karl Barth so loved Grünewald's great and terrible painting of the crucifixion. In Grünewald, one finds a complete repudiation of Christian Platonism: a theology of the cross stripped bare of all theology of glory. Yet Grünewald's Protestant aesthetic has its own perils. Without something like a Platonic anchoring, are we not right on the brink of a steep descent into theological nihilism? In beholding the earthly historical cross devoid of all religious mediation, do we not find ourselves at the very doorstep of hell?

14.
Or is that, perhaps, where we are meant to find ourselves when we behold the cross?

15.
The truth of the icon – a truth that Grünewald all but obliterates – is that there is, for us, no means of access to Christ accept through religious veneration. Our only contact with Christ is through worship in the company of the living tradition of the saints – even if our worship immediately becomes indistinguishable from idolatry. We cannot have Christ without religion: that is the truth that the icon teaches. But – this is what the icon forgets – we can speak of "true religion" only as we speak of a "justified sinner" (Karl Barth).
Ben Myers at 6:08 pm