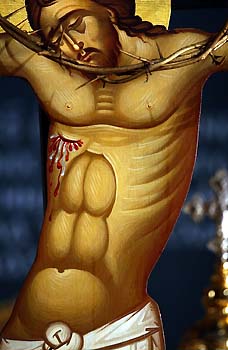 1. The doctrine of penal substitution is a theory – or, better, a model – of the atonement, an extended metaphor that narrates how God reconciled the world to himself in Christ. It is one model, but it is not the only model. Indeed, without radical recalibration, it is a theologically repugnant model with potentially vicious and disastrous social and political implications. For now, however, the point is this: while the church dogmatically defined its Christology at the Council of Chalcedon (451), it left its soteriology underdetermined. Therefore penal substitution – or any other doctrine of the atonement – should not be deployed as a litmus test of faith. Stanley Hauerwas says, “If you need a theory to worship Christ, worship your f---ing theory!”

2. The doctrine of penal substitution finds its classical expression in the theology of John Calvin (1509-64), and its definitive form in the theology of Charles Hodge (1797-1878). Today it is the lynchpin of “sound” conservative evangelical theology. In essence it says that the divine justice demands that humanity must “pay the price of sin,” and that the sentence is death; but that on the cross, Jesus identified himself with our sinful condition and died in our place, taking our sins to the grave with him.

3. It is usually claimed that the doctrine of penal substitution is Pauline (indeed, pre-Pauline), but Paul Fiddes observes that while Paul certainly thought of Christ’s death in terms of “penal suffering” (since “Christ is identified with the human situation under the divine penalty”), Calvin’s doctrine requires the additional idea of the “transfer of penalty” – and this theory “requires the addition of an Anselmian view of debt repayment and a Roman view of criminal law” (Calvin, remember, was trained as a lawyer!). A fortiori, to cite patristic evidence for the doctrine is anachronistic.

4. It is also usually claimed that St Anselm (c. 1033-1100) anticipated Calvin. Insofar as Calvin was dependent on Anselm’s view of debt repayment, and also added to Anselm’s feudal emphasis on the compensation of God’s honour his own late medieval emphasis on the expiation/propitiation of God’s wrath, this claim is true. However, in contrast to Calvin, for Anselm punishment and satisfaction are not equivalents but alternatives: aut poena aut satisfactio. For Anselm, Christ is not punished in our place; rather he makes satisfaction on our behalf. Therefore Anselm does not propound a doctrine of penal substitution. “Indeed, in the end,” according to David Bentley Hart, “Anselm merely restates the oldest patristic model of atonement of all: recapitulation.”

5. If the doctrine of penal substitution is to have any place in contemporary soteriology, there are certain elements of its demotic form that have to be eliminated: especially the notion that Jesus died to placate or appease God, or to secure a change in God’s attitude, or to settle a score or balance the books – and, indeed, the notion that the cross is itself a divine punishment. Rather than drive such a wedge a between God and Jesus, the cross expresses their unity and mutual love. It is not a matter of anger or honour but of rescue and risk, obedience and self-sacrifice, of putting the world (Anselm’s ordo universi) to rights and making it beautiful again. Penal substitution is often narrowly construed in individualistic terms, so that the cosmic scope of the atonement is marginalised or missed altogether.

6. I repeat: God does not punish Jesus, or even will the death of Jesus tout court. Herbert McCabe: “The mission of Jesus from the Father is not the mission to be crucified; what the Father wished is that Jesus should be human.... [T]he fact that to be human means to be crucified is not something that the Father has directly planned but what we have arranged.” That is, the crucifixion of Christ is not a penalty inflicted by God but the result of human sin, what inevitably happens when human sin encounters divine love. The cross, therefore, represents the wrath and judgement of God not directly but indirectly: God “gives us up” (παρέδωκεν, Romans 1:24, 26, 28) to the consequences of our destructive desires and actions, the human condition with which Christ identified himself in life, and to which God “gave him up” (παρέδωκεν, Romans 8:32), and to which we (with Judas) “betrayed”/“handed him over” (παρέδωκεν, Mark 3:19), in death.

7. Expounders of the doctrine of penal substitution often elide the juridical with the sacrificial. This is a mistake: the law court, not the temple, is the metaphorical setting of this model. Sacrifice, in the Bible, is never punitive; rather, it is a divine gift which, as human offering, becomes an expression of praise and gratitude. It is also a demonstration that reconciliation is a costly matter. But justice too, in the Bible, is not essentially punitive or retributive; it is restorative. If we continue to think of the atonement in forensic terms, it is essential to see it not as a legal transaction but as the transformation of a relationship. No cross without a resurrection, and no justification without sanctification – connections not always convincingly made by advocates of the doctrine of penal substitution.

8. Substitution – or representation? Did Jesus die “in our place,” or “on our behalf”? The debate is barren: both are true. They are, as Colin Gunton says, “correlative, not opposed concepts. Because Jesus is our substitute, it is also right to call him our representative.” But, again, it is in the court, not the cult, that substitution gets its metaphorical purchase: in Christ, the judge steps into the dock and is judged in our place (Barth). And, again, the theme is God’s liberating initiative, not the demands of the law. “The centre of the doctrine of the atonement is that Christ is not only our substitute – ‘instead of’ – but that by the substitution he frees us to be ourselves. Substitution is grace” (Gunton). And grace, not sin, runs the show.

9. Nevertheless, others – particularly students of René Girard – declare that penal substitution is an inherently violent model of the atonement; moreover, that it underwrites a culture of brutality and vengeance, ethically, socially and politically. Radical feminist theologians Joan Carlson Brown and Rebecca Parker have gone so far as to speak of “divine child abuse,” and to argue that the model’s image of Jesus voluntarily submitting to innocent suffering contributes to the victimisation of women. Black liberation theologian James Cone links the model to defences of slavery and colonialism. Michael Northcott suggests that it is no coincidence that leaders of the Religious Right, for whom the model is so central, are such staunch advocates of the lex talionis, capital punishment and the war on terror. Yet even Miroslav Volf, hardly a conservative evangelical, argues that “the only way in which non-violence and forgiveness will be possible in a world of violence is through displacement or transference of violence, not through its complete relinquishment.”

10. I am unimpressed and unconvinced by – and find myself finally opposed to – the idea of divine violence. Spin it as retributive justice all you like, I am with James Alison: “Nothing that is dependent on vengeance can be called reconciliation.” How can one say such a thing? The doctrine of the Trinity! If opera trinitatis ad extra sunt indivisa, and if the economic Trinity reveals the immanent Trinity (Rahner’s rule), how can the Spirit-anointed Jesus of Nazareth, who rejected the way of violence and vengeance, have a violent and vengeful Father? Not surprisingly, expositors of the doctrine of penal substitution usually isolate the cross not only from the resurrection of Jesus, but also from his life and witness. To rephrase I John 1:5: “This is the message we have heard from him and proclaim to you, that God is non-violent, and in him is no violence at all” – not even the violence of retributive justice! The work of Moltmann and Jüngel is an indispensable resource for working out the soteriological implications of the inextricable relationship between the doctrine of the Trinity and a theologia crucis. A doctrine of substitution may be salvageable, and still serviceable – but not a doctrine of penal substitution.
Ben Myers at 3:30 am